The Shen Long T’ai Chi Ch’uan Association “seeks to promote the true art of Traditional T’ai Chi Ch’uan around the world as a jewel of Chinese culture and philosophy, for improved health, as a martial art, for spiritual enlightenment, and application of its principles in everyday life.” 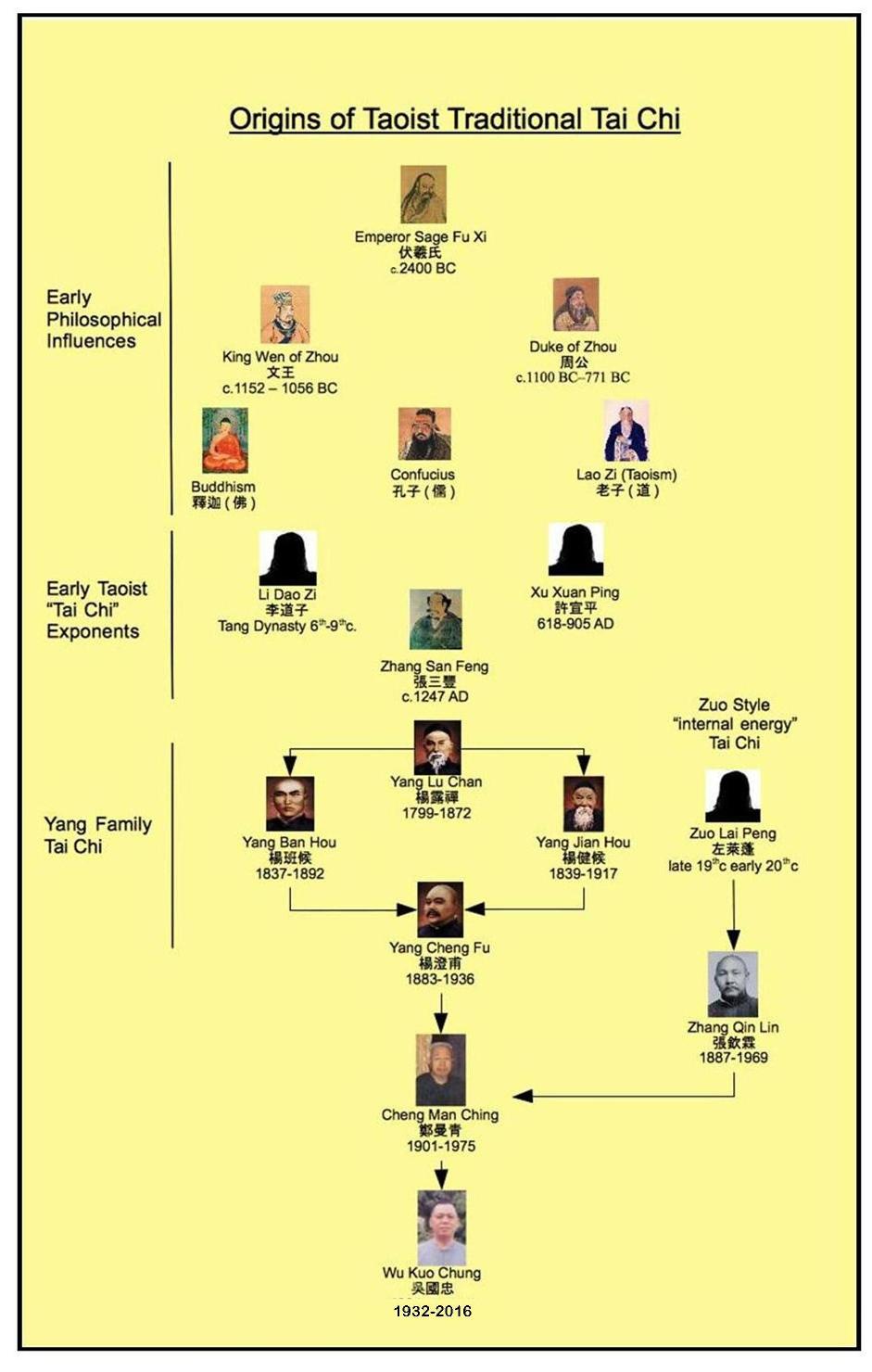 Shen Long T’ai Chi Ch’uan Association was founded by Grandmaster Wu Kuo Chung and since 2002 has been located in the mountains of central Taiwan. Shen Long, translated as Spirit Dragon, contains elements of both the Yang Family T’ai Chi Ch’uan and Tso Family internal energy methods.

It is said that one day Zhang San Feng came upon a crane and a snake fighting and as he watched, he saw that every time the crane attacked, the snake, with very small movements, was able to avoid the crane. It wasn’t long before the crane was exhausted from his efforts, gave up, and flew away. It was from observing the fight between the crane and the snake that Zhang San Feng realized that the soft overcomes the hard. He used this discovery to create the T’ai Chi Forms.

T’ai Chi Ch’uan has been influenced by many great masters. Some of the more familiar names include, Yang Lu Chan, Yang Cheng Fu, and Yang Cheng Fu’s most famous student and our master’s teacher, Cheng Man Ch’ing.

Cheng Man Ch’ing was a highly educated man with top skills in Chinese medicine, painting, poetry, calligraphy and, of course, T’ai Chi Ch’uan. It is Cheng Man Ch’ing who reduced the number of forms from the original Yang Family style while retaining the complexity and subtleness of the Yang form.

Shen Long T’ai Chi Ch’uan also contains the internal energy elements of the Tso Family. Tso Lai Peng was a famous martial artist who was known for his heavy sword (which was said to be about 88 pounds). One day as he was putting on a display and after much taunting by a Taoist priest, he agreed to attack the priest. Tso was easily disarmed by the priest. After his defeat he left to follow the priest. After three months the priest agreed to teach Tso the Taoist techniques of the internal energy methods.

Zhang Qin Lin (Chang Ching Lin), an illiterate man, was a fellow student of Cheng Man Ch’ing under Yang Chang Fu and also a Tso disciple. In exchange for teaching him how to read and write, Zhang agreed to teach Cheng Man Ch’ing the secrets of the Tso style.

Grandmaster Wu Kuo Chung, born in China in 1931, came from a family with three generations of martial artists and started learning martial arts from his father when he was only 9. At 16, Grandmaster Wu joined the army and in 1949 followed the nationalist forces to Taiwan. After he retired from the army Grandmaster worked for the Transport Ministry but continued to practice his martial arts. Grandmaster would frequently meet some of Great-Grandmaster Cheng Man Ch’ing’s students who were anxious to try out their skills on such a prominent martial artist such as Grandmaster Wu. From Grandmaster’s perspective, T’ai Chi Ch’uan was just “Tofu Kung Fu,” meaning completely useless in application.

Grandmaster Wu came to the United States for a few years in the 1980’s. It was in the Chicago area that he met both Sifu Kevin Grissom and Barry Schultz who nurtured the art and established schools in Wisconsin and Illinois.

Grandmaster Wu died on June 29, 2016 in Taiwan. To read more about Grandmaster, go to Remembering Grandmaster.

To read more about Grandmaster Wu and the origins and history of T’ai Chi Ch’uan, visit the Shen Long UK website.