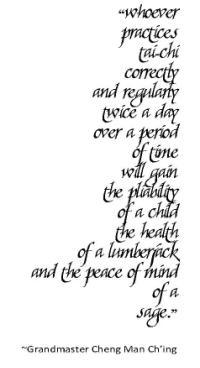 T’ai Chi Ch’uan, translated as Grand Ultimate Fist, is a slow moving, mind/body exercise, an “internal energy” exercise. It is a combination of health, self defense, and philosophy including the philosophies of Taoism, which includes the writings of Lao Tzu* and Chuang Tzu, and Confucianism and Buddhism. T’ai Chi focuses on cultivating, nurturing, and balancing “Chi”, the energy that moves through the body, and on relaxing the muscles, ligaments, tendons, and the mind on a deep level. For this reason it is sometimes called “meditation in motion.”

People study T’ai Chi for a variety of reasons but most students find the practice calming and peaceful, requiring great awareness and concentration and a unity of mind, body, and spirit. T’ai Chi was developed to balance the yin/yang energies in the body–to keep the body healthy and in balance. The art of T’ai Chi Ch’uan focuses on the development of internal energy rather than on physical strength or endurance, although once developed the internal energy gives one both strength and endurance.

Western studies, including studies published by the New York Times, Mayo Clinic, National Institutes of Health, and Harvard Medical School, to cite just a few, have shown T’ai Chi to benefit the immune system, the cardiovascular system, and improve balance and breathing, while at the same time being a low impact, weight bearing exercise. The principles we follow rely on moving with softness and relaxation, while developing mental awareness, internal strength, and health.

* A word about transcribing Chinese characters into Roman letters: Since the Chinese language uses characters rather than the Roman alphabet, systems were developed to transcribe the characters into sounds called Pinyin. The word “pinyin” literally means “spelled sound.” This can, however, create some confusion for us as we often combine the forms, Romanized, Wades, Giles, and other Pinyin systems, and therefore, we learn to read the sound rather than the word. For example:

Tai Chi Chuan may also be written as Taijiquan
Tao as Dao
Qi as Chi
Qigong as ch’i kung or chi gung
Lao Tzu, may be written as Lao Zi or Lau dz
Chuang Tzu, as Zhuangzi
Cheng Man ch’ing as Zheng Manqing